The Bat Mitzvah Photography of Ariel

In honor of Ariel’s Bat Mitzvah, the Kaplan family arranged a lifestyle portrait session on a separate day to their reception party. We all had a wonderful time and it really shows in the images. 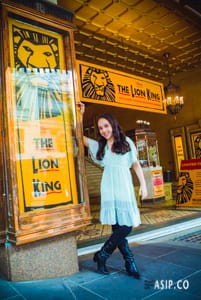 All three sisters Ariel, Dena and Gemma-Ashley are very talented and had no problem strutting their stuff in front of the camera.

Ariel Kaplan gained wide prominence in 2006 when she shared the role with four other girls as Nala in “The Lion King”. It was at this time she celebrated her Bat Mitzvah. We made the obvious choice to have some portraits taken at the Regent Theatre, where she was performing at the time.

She was then invited to perform the role for a year in Shanghai.

Ariel invited cast members from The Lion King and together with her sibling’s other close friends, they have in the entertainment business.

The atmosphere was alive with plenty of dancing and singing. Their guests were treated by all the talent at this reception. A night always to remember.